OLEDs - thin, light-emitting surfaces - are regarded as the light sources of the future. White OLEDs consist of stacked, ultra-thin layers, each emitting its own light color, all together resulting in white light. Up to now it has been impossible to predict the exact light color produced by a white OLED; manufacturers had to rely on trial and error. Researchers at Eindhoven University of Technology, Philips Research, Dresden University of Technology and other institutes have now developed a method that allows the color of light produced by a specific OLED design to be calculated with high precision. They did this by modeling the complex processes in OLEDs on a molecular scale. This technique will allow manufacturers to greatly improve their OLED design processes and reduce the cost. At the same time the energy efficiency and lifetime of OLEDs can be increased. The results were published online on Sunday 14 April 2013 in the leading scientific journal Nature Materials.

Revolution
It looks as though OLEDs - organic light emitting diodes - will cause a revolution in the world of lighting. OLEDs are light-emitting surfaces, which means they are visually more attractive than point light sources such as conventional or LED lamps. They can also be flexible and transparent, which opens up all kinds of new opportunities. Plus - and unlike normal LEDs - OLEDs are made of very low-cost materials, of which only very thin layers are needed. As a result, the prices of OLEDs are expected to be low once mass production starts. This clip gives an impression of what's possible with OLEDs:http://www.dezeen.com/2012/12/13/oled-philips-lumiblade/

Nanosecond steps
To predict what kind of light an OLED design will produce, the researchers made computer models of the electronic processes in the OLED at the deepest level. These showed for example the injection of electrical charge, the creation and distribution of the ‘excitons' - pairs of positively charged electrons and holes in a bound state - and the creation from these of individual photons, the light that is emitted. "At first we thought it would never be possible", says researcher Peter Bobbert of Eindhoven University of Technology. The main difficulty was that each change in the electrical charge also influences all the other charges, which makes the simulation extremely complex. But they succeeded by using Monte Carlo simulations with nanosecond steps. The results proved to correspond very well to measurements carried out at Philips on real OLEDs made at Dresden University of Technology

Factor of three
One of the results is that the researchers can now predict where light is produced and lost in the ultra-thin layers. That makes it possible to optimize OLEDs so they produce the same amount of light using much less electric power. The researchers expect that the efficiency can still be increased by a factor of three. Manufacturers can also use this new knowledge to design OLEDs with specific colors. They can calculate in advance exactly how thick the different layers need to be, and how much pigment has to be added to the layers. The much shorter and less costly design process will allow the overall development costs to be reduced, leading to lower prices of the final products. "This has already been possible for a long time in the field of micro-electronics, with the ability to precisely predict the behavior of integrated circuits", says Bobbert. "Now we can do the same thing with OLEDs."

The research was made possible by financial support from the European Union (FP7 project AEVIOM), the Dutch Polymer Institute, NanoNextNL and NanoNed. 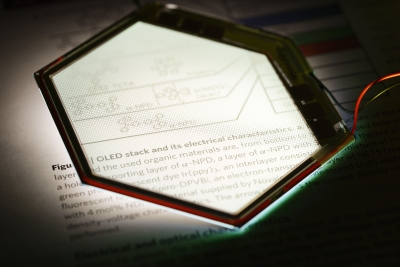 A transparent OLED made at Philips Research Aachen, seen from the rear; light is emitted from the front. Researchers have developed a tool that allows the light color of OLEDs to be predicted precisely.