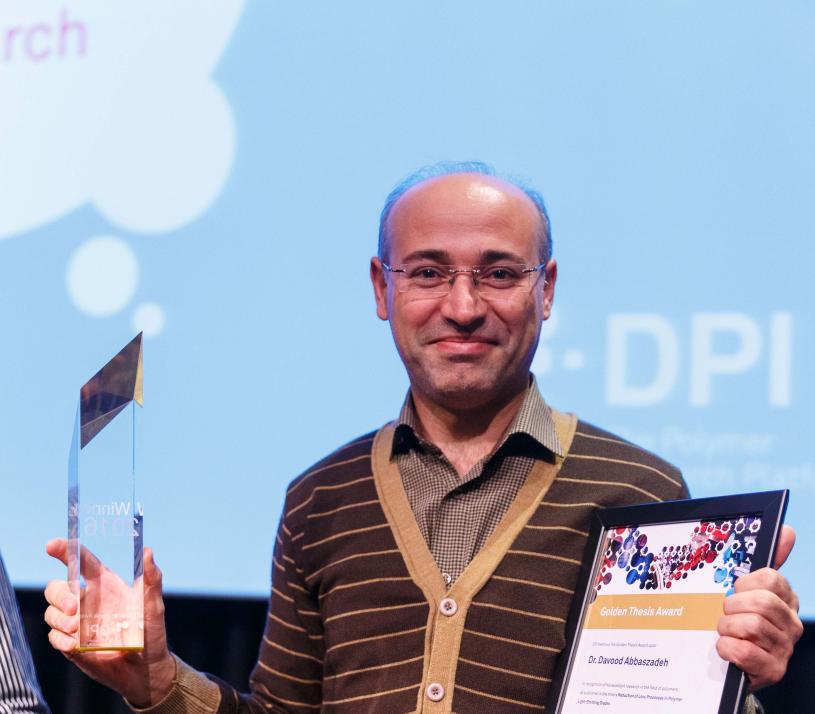 The DPI Golden Thesis Award for 2016 has been granted to Dr. Davood Abbaszadeh in recognition of his excellent research in the field of polymers, as published in the thesis Reduction of Loss Processes in Polymer Light-Emitting Diodes. Dr. Abbaszadeh defended his thesis in May 2016 at the University of Groningen (Netherlands). The research described in the thesis formed part of the research programme of DPI and was conducted under the supervision of Prof. Paul Blom of the University of Groningen (Netherlands), who is now director of the Max Planck Institute (MPI) for Polymer Research in Mainz (Germany).

The Golden Thesis Award is granted annually for the best PhD thesis resulting from DPI-funded research. Davood Abbaszadeh was declared the winner from among the three finalists competing for this year’s award. The other two candidates were: Nick Jaensson (Eindhoven University of Technology), with a thesis on Modelling Interfaces and Particles in Viscoelastic Fluids, and Yi Jiang (University of Groningen, with a thesis on Enzymatic Polymerization of Biobased Polyesters and Polyamides. The award was presented during the plenary session of the DPI Annual Meeting 2016 in Arnhem on 23 November.

The three contenders had been selected from the seven nominations received this year. During the plenary session, each of them gave short presentations describing their PhD research in the presence of the Award Committee comprising Prof. Martien Cohen Stuart (former Scientific Director of DPI, chair), Prof. Costantino Creton (ESPCI Paris), Prof. Cor Koning (Eindhoven University of Technology) and Dr. Bernd Ensing (University of Amsterdam). The committee judged the candidates on four criteria: scientific quality and originality, relevance and societal impact, presentation, and embedding within DPI.

Given the excellent quality of the work of all three researchers, it was a close finish, but the Award Committee was unanimous in its choice of the winner: “The research work of Abbaszadeh is truly exceptional in the sense that a breakthrough has been achieved. The problem of electron trapping in PLEDs, which had haunted the field for 30 years has been solved in a most counterintuitive way, based on insight in the trap occupation statistics, namely by simply diluting the electron carrier material by replacing it with a cheap insulating polymer. Although this reduces the density of electron carriers, it has a much larger effect on the trapping, so that conduction goes up by orders of magnitude.” The committee emphasised that the credit for this most original contribution went entirely to Dr. Abbaszadeh, since his supervisor (who had left for the MPI in Mainz) was not involved in the daily supervision of his work at the crucial stage and only became aware of the results after the first trap-free diodes were fabricated.

Davood Abbaszadeh was delighted with the award. Asked what it meant to him professionally, he said: "It’s a great honour. To be recognized for your work in this way is very encouraging and boosts your self-confidence. It also shows that I succeeded in achieving what I had wanted to achieve.” He expects his PhD research to find its way into practical applications in the near future, in products such as lighting devices and displays, offering greater efficiency than for example OLEDS.

Dr. Abbaszadeh is currently working at Linköping University in Sweden, where he is doing research in the field of organic ratchets for use in energy harvesting systems.