Memorandum of Understanding between the TU/e, DPI and Brazilian UFRGS

Representatives of the TU/e and DPI were received on Friday 5 April by acting dean, Rui Vicente Oppermann of the Universidade Federal do Rio Grande de Sul (UFRGS) in Brazil. The meeting discussed the establishment of an agreement between the European institutes and UFRGS for development of joint research, especially in the area of ​​polymers.

Jacques Joosten, the Managing Director of DPI states that the intention of the institute is to create a bridge with UFRGS to enable the exchange of information that is being developed in both countries and facilitate a dialogue among researchers.

Oppermann said he is pleased with the approach of UFRGS with the TU/e and DPI because it involves two faces of globalisation: exchange of students and joint research. The president also said that there is a demand for high technology and skilled people, certainly the Institute of Chemistry is the right place to carry out cooperation.

The Universidade Federal do Rio Grande de Sul is one of the largest federal universities in Brazil. It is almost completely located in Porto Alegre, with four campuses (Campus Centro, Campus Saúde, Campus Olímpico and Campus do Vale), some isolated buildings (e.g. the Business School and the Institute of Arts) and some isolated units in other cities. UFRGS is among the best Brazilian universities, and has one of the greatest numbers of scientific publications. UFRGS has over 27,000 undergraduate students and over 9,300 graduate students. The university has more than 2,500 professors. 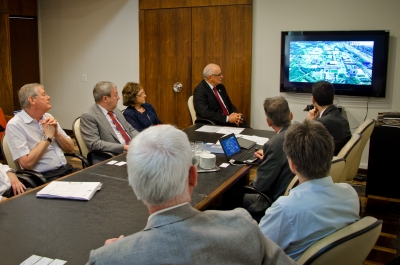