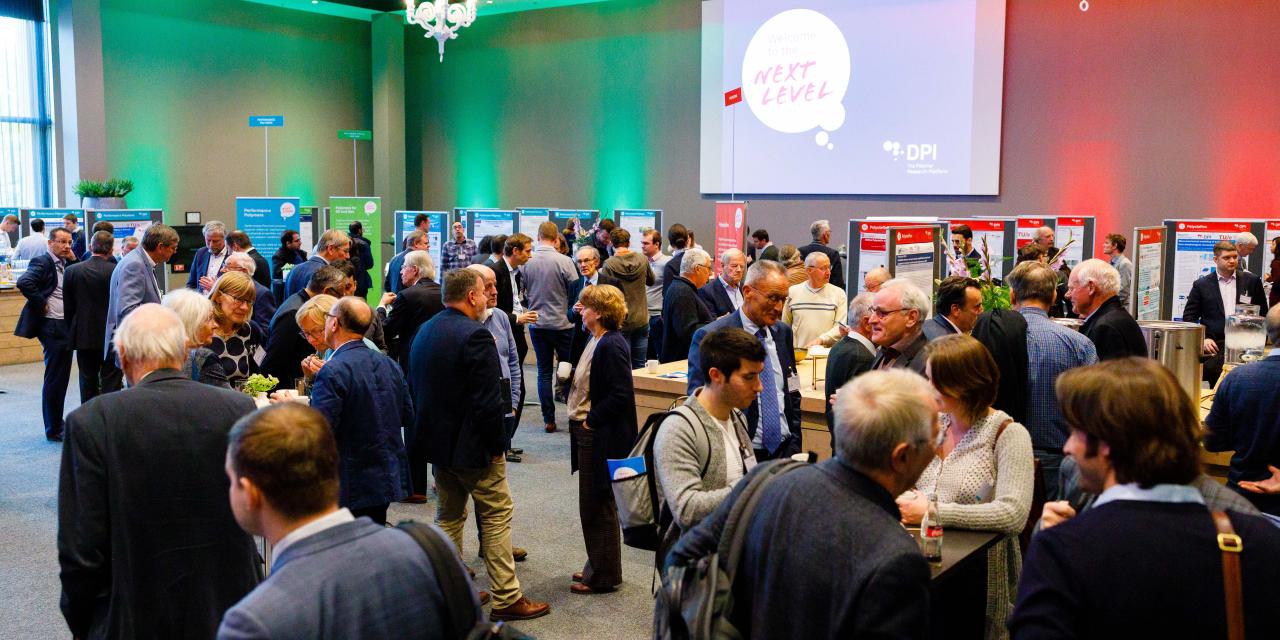 This year’s Annual Meeting centred around the farewell of outgoing Managing Director Jacques Joosten. Although the meeting marked his official farewell, Jacques will continue to hold the office until such time as a successor is appointed.

Around 275 people from across the world attended the event, held at the Van der Valk Hotel Conference Centre in Eindhoven on 12 and 13 November.

The morning of the first day was devoted to a “Get to Know DPI” session, providing guests the opportunity to learn about DPI in general and about DPI’s research programmes in particular. DPI Programme Area Coordinators were present to explain about the activities in their respective areas: Polyolefins, Performance Polymers, Polymers for Oil & Gas and Functional Polymers and Surfaces. Various projects being carried out under the auspices of European Union programmes were also highlighted.

The afternoon programme on the first day included a retrospective talk by Dr. Thijs Michels, former Scientific Director of DPI, highlighting developments in polymer science and technology during the past twenty-five years. Speaking about the role that DPI had played for over 20 years in bridging industrial and academic research, Dr. Michels emphasised how Jacques Joosten’s extensive network in the polymers in the Netherlands and abroad as well as his dedicated efforts had helped to bolster the value of the DPI collaboration platform.

On behalf of the outgoing Supervisory Board members (DPI recently installed a new Supervisory Board), Dr. Herman van Wechem praised Jacques Joosten for the way he had managed DPI for fourteen years and thanked him for the part he had played in assuring the continuation of DPI in an uncertain setting.

Panel discussion
In continuation of the efforts DPI has been making for the past few years to encourage debate on the subject of sustainability and the need for circularity of plastics, the overall theme of this year’s Annual Meeting was “The Role of Plastics in the Circular Economy, Today and Tomorrow”. In this context, a special programme item was a Panel Discussion – moderated by Joris Luyendijk, well-known journalist, author and anthropologist – on a very topical subject: the management of plastic waste, in particular flexible plastic packaging waste. Panel members had been chosen to represent different segments of the plastics value chain:

•  Prof. Vincenzo Busico, Full Professor of General and Inorganic Chemistry at the Department of Chemical Sciences of the Federico II University (Italy)

A lively exchange of ideas and views took place under the experienced moderatorship of Joris Luyendijk. The panel members were all agreed that pursuing sustainability and circularity of plastics was a common priority. A variety of opinions were put forward about the nature and magnitude of the challenges and possible approaches to them. Here’s a summary of members’ views: there is no single and no simple solution; a comprehensive approach is desirable; although a big leap is what everyone wants, in practice a step-change is more realistic; the problem of plastic packaging waste or the circularity of plastics should not be seen in isolation: it should be seen in conjunction with the broader, bigger issues such as climate and energy; recyclability is only one of the many aspects to be considered; the diverse interests of the players involved leads to a silo mentality: what is needed is a more direct connection between stakeholders from the different value chain segments; the explosive growth of some world economies increases and aggravates the problems; while public buy-in and awareness are important in order to realise changes, there is still insufficient public knowledge (e.g. about plastics) and awareness about environmental consequences; proper education of the public is therefore a key priority.

It was clear that – given the diverse interests and roles of the sectors involved and the economic and technological complexity of the matter – there is still a long way to go before any concrete steps can be taken in a concerted manner. About one thing, however, there was general consensus: business as usual is not an option. Asked for suggestions and ideas for breaking the current impasse, the panel members advocated identifying what each one of us can do to tackle the problem; working together and more proactively; establishing mission-driven partnerships among all players involved; a smart and prudent use of resources; and a good dose of realism.

Poster Award
Every year at the DPI Annual Meeting, scientists working on DPI projects are given the opportunity to present their research by means of posters and compete for the DPI Poster Award. In keeping with the practice a few years ago, the prizes are awarded on the basis of a public vote: this year, too, all attendees of the annual meeting were invited to rate the posters and cast their votes for the three best posters.

The first prize was awarded to Georgios Vogiatzis of Eindhoven University of Technology for his poster entitled “Physical Aging of Glassy Polymers: Climbing up the Time-scales”; Georgias is working on a research project in the field of Performance Polymers. The second prize went to Gaia Urciuoli and Antonio Vittoria of the University of Naples, whose work is in the field of Polyolefins (poster title: “Investigating Microstructural and Structural Reproducibility of HTE Synthesized Olefin Block Copolymers”). The third prize was awarded to Yuanshuai Liu of Utrecht University, working in the field of Polyolefins (poster title: “Structure-Activity-Polymer Property Studies on a Novel Ziegler-Natta Olefin Polymerization Model System”).

Conference dinner
In keeping with tradition, a Conference Dinner was held on the evening of the first day. Some 200 people from a variety of companies and universities from across the world attended the dinner, which offered an excellent opportunity to get to know one another in an informal setting. Since this annual meeting was also a farewell event, several relatives and close friends of Jacques Joosten were also present. Among the latter were two long-standing scientific friends from China and Russia. They both made short dinner speeches. Prof. Jiasong He, of the Institute of Chemistry of the Chinese Academy of Sciences, spoke about his interactions with the polymer community in the Netherlands during the past thirty-three years. Dr. Liuba Myasnikova, leading scientist at Joffe Physico-Technical Institute of the Russian Academy of Sciences, also spoke about her longstanding collaboration with Dutch scientists.

As in previous years, the programme of the Annual Meeting included Review Meetings of the various Programme Areas of DPI.

Farewell present Jacques Joosten
Three years ago, Jacques became involved in a socio-economic project in Muleba, a district located in the Kagera region in northwest Tanzania. The project is a collaborative initiative of Mali, a farmer’s organisation in Tanzania, and Mali Muleba, a non-profit organisation based in Belgium. Mali Juice is an enterprise that buys fruit from local farmers and uses it to produce healthy fruit juice exclusively for sale on the local market. Mali Muleba contributes technical expertise and management experience to the enterprise and also provides financial support. The two partners work together to assure a better and sustainable future for the generations to come: Umoja ni nguvu! (Swahili for: Collaboration pays!)

Instead of farewell presents, Jacques would very much appreciate donations to the Mali project. You can send your donation directly to the bank account of Mali Muleba vzw: BE18 0016 5913 3365, specifying “Farewell Jacques Joosten”.

For more information on the Mali project, please visit: www.malimuleba.com

Back
Agenda
36th International Conference of the Polymer Processing Society